Make Twitter Work for You – 10 Ways To Rock Your Tweets

Never mind the Rock Stars who Tweet. This post will highlight 10 ways that YOU can Rock at Tweeting.  These are 10 easy actions that will not only help you Tweet well, but moreso take a Tweet and leverage engagement and connections from that Tweet …in an authentic and fun way. 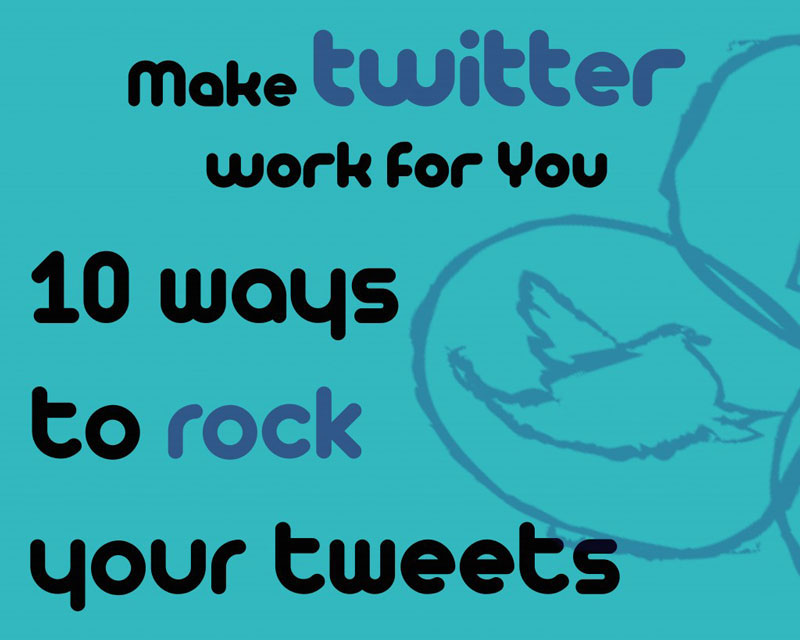 I was inspired to write this post as I sat Tweeting (a lot) in recent weeks.  I wrote a blog post that went relatively viral (I say viral not in the million-YouTube-hits-kind-of-viral, but in the sense that the post had a huge reach to the target market I intended it for; and was reposted a number of times by some major websites. And then there were the much valued Pins, Shares and of course Tweets that followed.

Here is the post and here is the post as it was published as a guest-post on Entrepreneur.com. Shall I say right here… Love Entrepreneur.com. Grateful for being able to write for them. Following the period of heavy Twitter traffic, I want to dive in and showcase a number of things you can do with a Tweet, especially a Retweet or @mention of your content (any of your content). Many of these I have used in the past few weeks, so I know that they work.  These strategies will help you to build your audience, your relevant audience on Twitter.

These 10 strategies will help you to:

If you are new to Twitter, check out my recent post for Europe's Social Media Blog – it is a great overview of how to get started on and use Twitter effectively.

10 Ways to Rock Your Tweets:

I have posted about this before, here.   I say that we should bring back good old-fashioned etiquette and use the person's name (where relevant) in a Tweet.  I am still amazed at how little people do this!  By using their name in a Tweet you are immediately personalising your Tweet.  You will stand out, trust me. It is definitely worth the 3-10 characters that it requires on average to do so.  I also recommend that you: 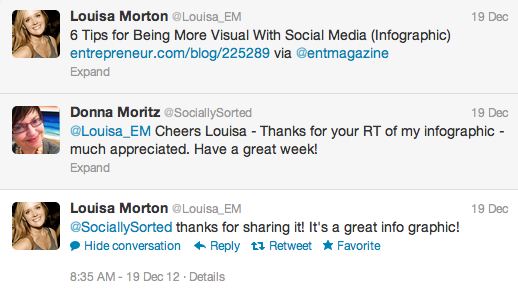 Use first names. It's worth the effort!

I don't know about you, but I take notice when someone uses my first name!

#2  Look for things in common.

It doesn't take long to click on the “author” of a tweet and have their profile pop up. Do a quick scan on the profile and see if you have any things in common with the person. Do they live in an area similar to you? Do they have interests similar to yours?  Are they someone that you simply admire for the work they do yet, you had not made the connection about them previously?  What can you squeeze into your tweet that is personal, about them and links you to them?  It's human nature to make “relevant” small talk and we love to find things in common. 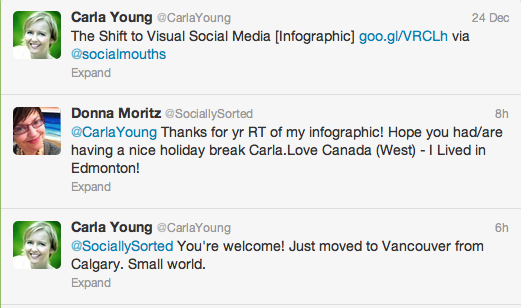 It turns out that @CarlaYoung and I have something in common! Other than being Mums and Social Media Addicts…oh and loving coffee…

I don't know about you, but I take notice when someone goes to the effort of finding out a little about me (in a non-stalky-kinda-way).

If you see something great about the person, let them know. You would be surprised how a little comment, compliment or acknowledgement of something  will make their day. It doesn't have to be much, but if there is something you can acknowledge, then do so. It only takes a second. 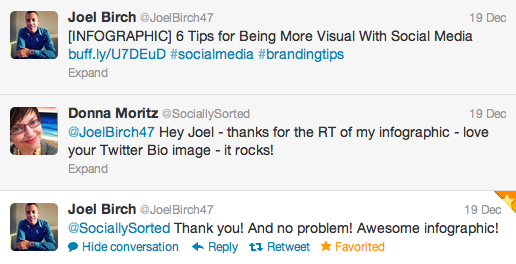 It only takes a second to pay a compliment! In this case, I loved Joel's creative Twitter Bio, so I said so!

I don't know about you, but I feel good when someone pays me a compliment.  Try doing it for someone else!

This one is a no-brainer for me. If someone shares your stuff, Retweets your stuff, mentions your stuff, compliments you on your stuff…whatever your “stuff” is, then thank them.  Every time my Twitter username is mentioned I try to respond.  And I always say thankyou. A simple gesture that only takes a moment.  And sometimes you meet really cool people during the “engagement” afterwards: 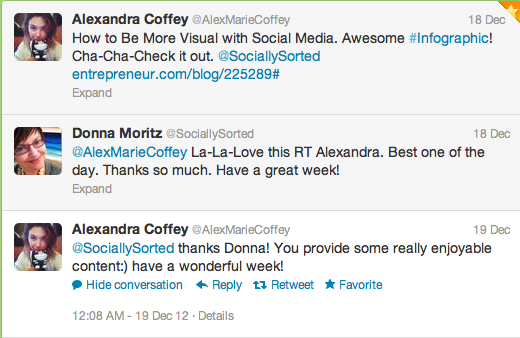 Alexandra paid a great compliment in her Retweet of my post. I just had to say thanks….especially when it was such a great endorsement. She turned out to be kinda cool (and she has this compliment thing worked out!).

I don't know about you, but I like to be acknowledged.  You?

For example I have lists titled Engaging People Who Rock, Mums I'd Do Coffee With, Companies I love, Social Media Innovators, Savvy Marketing and Tools that Rock.  In most cases I try to make the lists positive, upbeat and “complimentary” while still being functional in my need to track the people I follow.
My personal favourite is Engaging People Who Rock. Anyone who interacts with me with a direct mention (not always just for a retweet… an actual interaction is usually required) gets added to this list. They might indicate that they want more content, say thanks, show interest in my content or services, comment about blog posts.  You could do the same, or even have one just for Retweeters.  Just be creative with it!

Erin kinda loved being added to Engaging People Who Rock!

I don't know about you, but it's kind of nice to be added to the cool group, don't you think?

Even if I am sending out a bunch of Thank You Tweets, I have a rule that every tweet will be different, if I can make it so.  For example, I will use the person's name or mention their company or respond to something that they have said, or talk about a particular event (ie upcoming weekend, Christmas, Thanksgiving Weekend). I will also try to be wary of “location”.  Thanksgiving weekend is not a public holiday in Australia, but it is in the States, where a lot of my readers are. Why do all of this? Apart from showing an interest,  it also shows that you are “real” and the tweet is not automated.  If you are going to tweet, then make it genuine.  I don't mind automation for the sake of scheduling “content” tweets containing links to posts, but if you are addressing a specific person, make it personal! 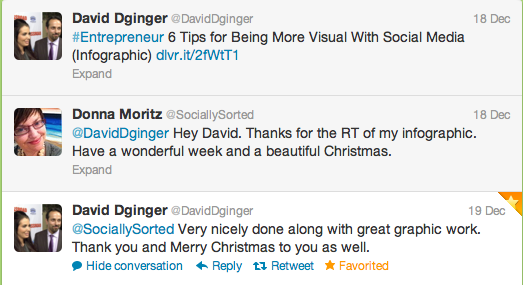 I don't know about you, but I kind of like talking to a real person in real time, at the other end of a Tweet!

By this, I mean take a moment, and actually click past the RT or Tweet. Take a look at the profile of the person. Perhaps take it a step further and check out their website.  See if it looks interesting to you.  In just the last two weeks, I have discovered that people who have retweeted my articles have included:

In short, these are people I would not have connected with, had I left their RT just floating in a sea of RTs and not checked out who was the person behind the Tweet.
I don't know about you, but I think it's nice to know that someone might actually look at your Profile or website and comment!

#8.  Follow Up on Lists that you are added to by someone else

This is another way that a simple Tweet can lead to something more.  If you are added to a List you can see it:

This guest post that I wrote (one of my favourite posts ever!) grew out of the simple gesture of someone adding me to a cool list.  I did not know Angela Hemming at the time, but she added me to a list with a great name:  Transmedia Savvies.  I liked it. I thanked her.  We chatted.   Had Angela not added me to a list with a great name, I might not have found out that she was a talented film producer.  I might not have found her blog. I might not have found out about her skill as a photographer. I might not have agreed to do a guest post for her “Tools of the Trade” series.  And I would not have been able to welcome her as a guest writer on my blog to write Beyond instagram – How to Use Multiple Apps to Get the Photo Effect You Want. All from being added to a little old list.
Sometimes it is not about product sales and getting new clients. Just sayin'.

And here is the visual for how we met:

I don't know about you, but I would say that those few seconds it took Angela to add me to a list had a good outcome, wouldn't you?

Of course, another way to acknowledge other Twitter Users is to thank them for following you – and even better, follow them back.  In my case, I tend to follow more when someone engages with me than when they follow me. It is a personal choice as I like to acknowledge engagement, but you may choose to follow everyone.  Regardless, the very act of following is a “thankyou”. But you can take it one step further and thank them for following you with a simple Tweet.

Don't ever discount how much a simple RT or mention of somebody's hard work means to them. If someone has worked on a blog post or piece of writing, the very act of sharing and acknowledging it means the world.

Even experienced bloggers like to know that their work is appreciated.  So never underestimate how much it can mean for you to take a couple of seconds and share a post with your network, no matter how big or small it is.  I can guarantee that it is worth it. Not only to your network (as they get to benefit from content that you think is great…and you should know!)…but the person writing it gets a hat-tip from you, and possibly more people beyond you.  We pay for magazines but we read blogs for free. The best thing we can do to show that we liked an article is to share it.

Note:  If you struggle to get the time to share posts, I highly recommend that you set up Buffer App – it allows you to easily space out the content that you come across as you browse the web.  Easy!

That's my tips for Tweets that Rock. What are yours? Have you had any great connections come out of a single Tweet? 4 Meet Edgar Alternatives That Will Save You Hours

Are you looking for Meet Edgar Alternatives for...

END_OF_DOCUMENT_TOKEN_TO_BE_REPLACED Do you want to learn some instantly actionable,...

END_OF_DOCUMENT_TOKEN_TO_BE_REPLACED Battlefield of the Social Media Management Tools: Hootsuite vs Agorapulse vs Sprout Social

Are you confused about all the options for...