Channel 10 has done it again.  The Television Network has leveraged the power of Super Fans on Social Media to spread the word about their new offering:  Puberty Blues, a drama series set in 70s Australia and based around the lives of two girls growing up around Cronulla Beach in Sydney.

Set to hit TV screens on August 15th, Puberty Blues is already getting some great reviews for the cast and portrayal of life in the 70s…sure to be a trip down memory lane for many Australians. 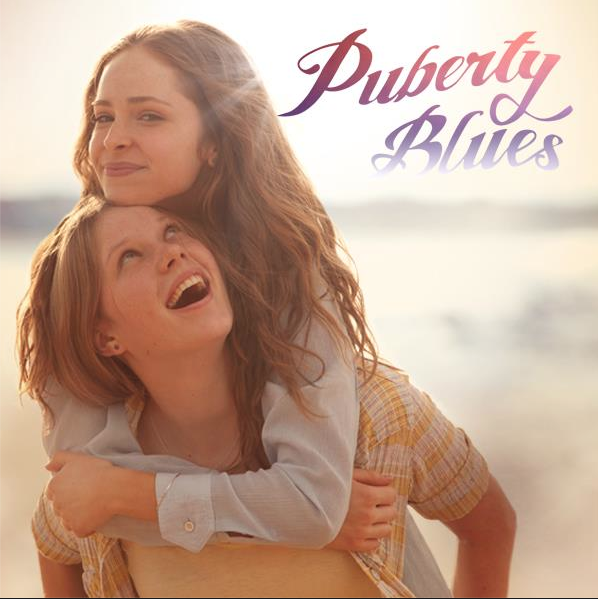 What is Channel 10 doing that is so innovative when it comes to social media?  Well, a few things actually: 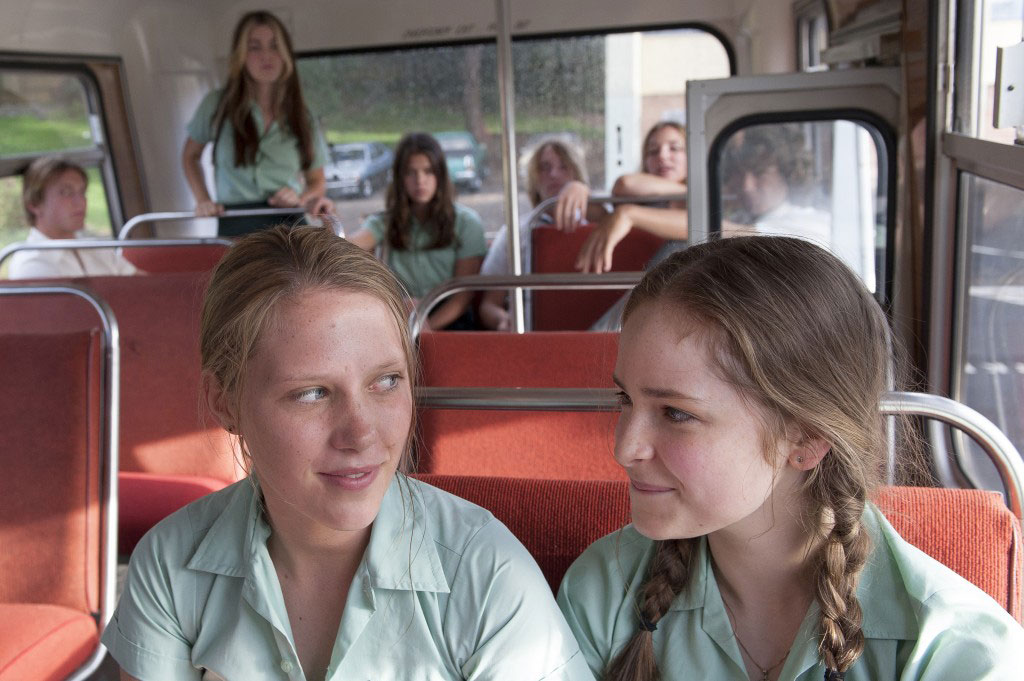 With an air of “exclusivity” for a “limited time” fans were offered the chance to view the 1st episode early!

Of note, before the announcement of the “exclusive online screening” was made, Ten were strategically posting on a Facebook page that had gained a lot of traction in just a short time.  Even before posting about the advanced screening, they were encouraging fans to post about their 70s memories, and they held a fun location-based photography promotion at the annual Splendour in the Grass Festival: 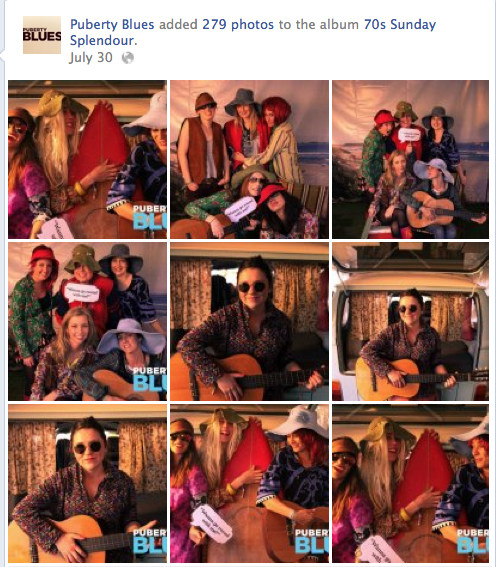 Channel 10 set up a photo booth at the annual Splendour in the Grass Festival – where fans were photographed dressed in 70s style. The photos were then posted on the Facebook page and fans encouraged to share them! 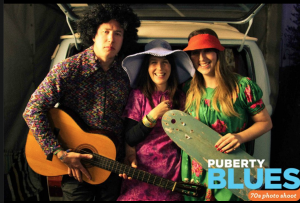 Fans Rock their 70s Style at Splendour in the Grass…then share their photos! Note the Puberty Blues Branding. 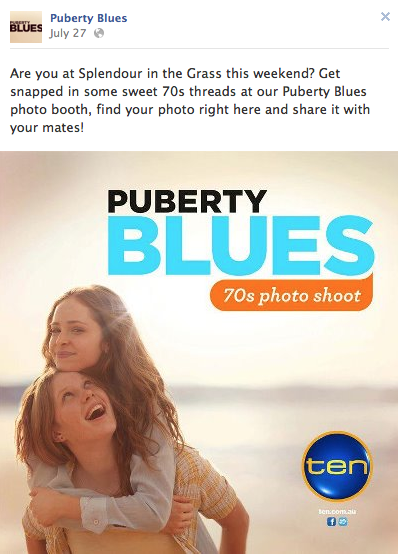 Offline photos went online for sharing…spreading the word about the show before the main “preview” was launched to the public.

In addition to “offline” and location based events such as those above, the Social Media Team went into overdrive, cutting straight to the heart of fans with nostalgic 70s posts and using the 70s theme to create community on their page.  Fans were already engaging on the page well before the sneak preview episode aired online: 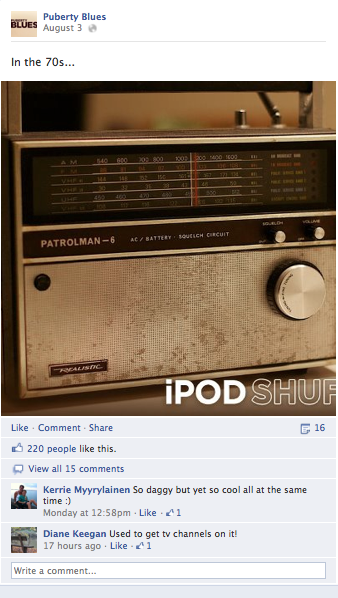 Fans were quick to like, share and comment on images from the 70s…by creating a sense of nostalgia, Ten were already growing a group of super fans before the series began!

and then the teaser… 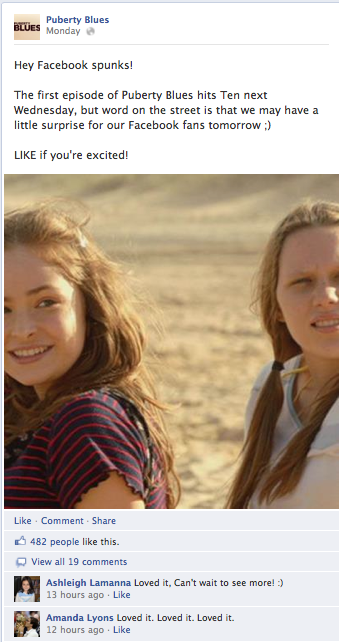 Fans were fed this “teaser” to get them ready for the release of the online advanced screening…a clever strategy by Ten.

How does the App work?  With the show only up for 48 hours to view online, Fans are asked to “like” the Puberty Blues Facebook Page in order to access the App which will allow them to view the show.  Go to this link to watch before midnight tonight! 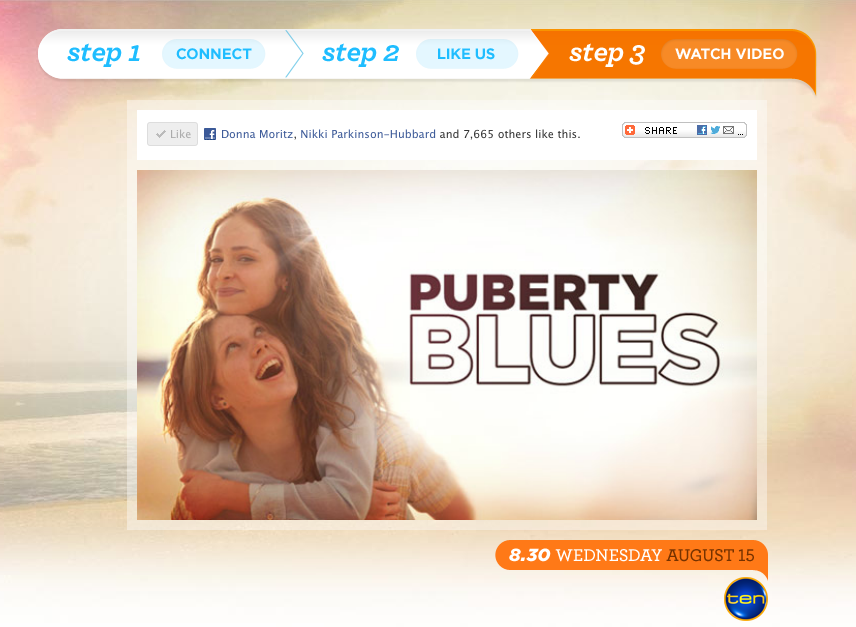 A number of factors make this work really well: 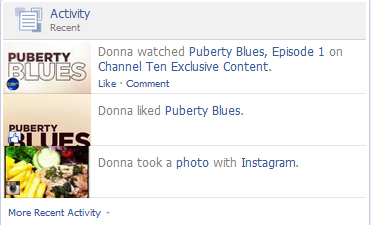 When I watch, my friends see it. A clever strategy to create buzz, encourage more fans to like the page as well as engagement on Facebook.

The Head of Entertainment – Digital at Channel 10, Vanessa Arden Wood, explains the strategy behind this successful social media campaign:   “More and more people are using social media to talk about the TV programs they enjoy and we want to reward the ”˜superfans' with the ability to watch the episode ahead of time. With a strong, highly anticipated show like Puberty Blues we also hope these people will continue to talk about the experience and the episode and encourage their friends to tune in.”

As Vanessa explains, it is their VIP treatment of fans that gets results (and increases the social proof to friends of fans).   “Offering fans something ”˜extra' also increases the social buzz for a show” she says. “And this is becoming increasingly important as people choose what to watch on TV through social recommendations.” 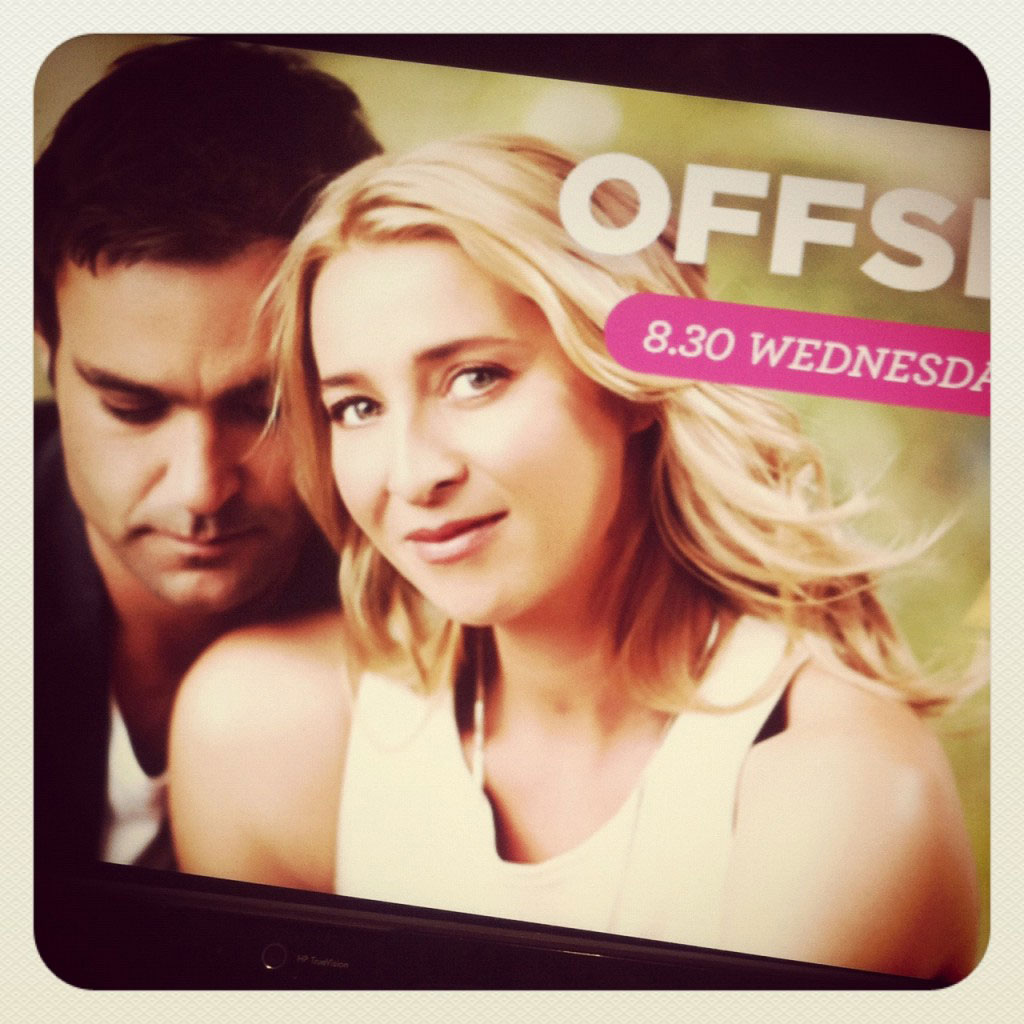 The successful online launch of Puberty Blues has followed in the footsteps of Channel 10's launch of Season 3 of the Popular Show Offspring – with huge success.

In fact, Channel 10 is using innovative custom apps for many of its major shows.  The hugely popular Masterchef Australia has also used custom apps to create buzz, encourage sharing of content and increase engagement on Facebook – with competitions for fans. 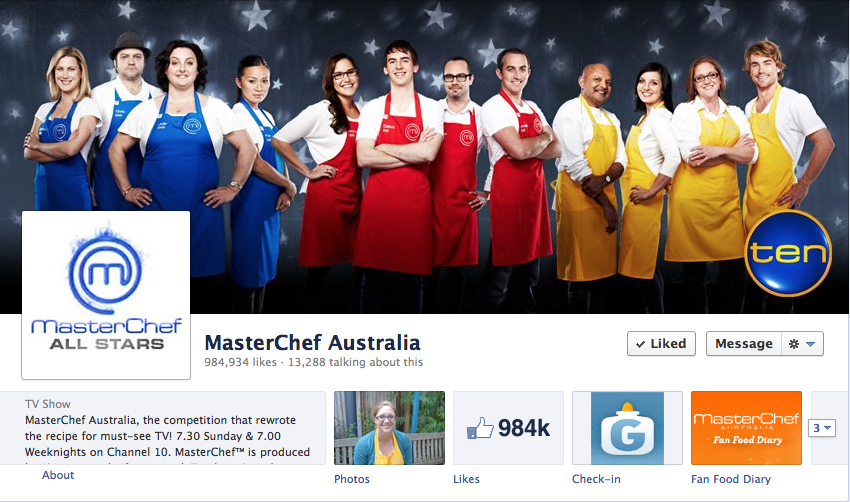 Masterchef Australia has maintained a steady rate of engagement and community on the Facebook Page – and with innovative custom Competition Apps, this is sure to continue 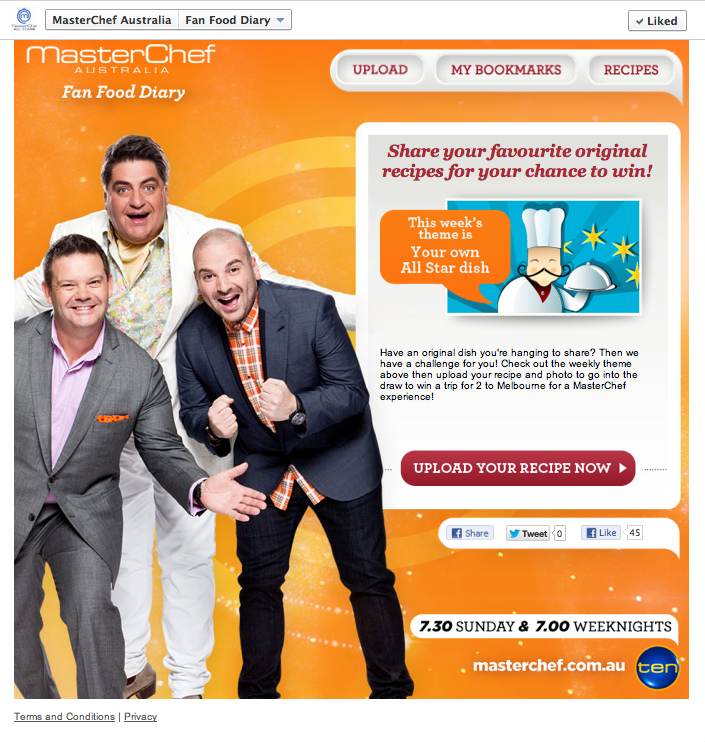 With Masterchef Australia, Channel 10 have opted for a Custom Competition App –    a fun Interactive Food Diary.

The Masterchef App provides a great utilization of open graph functionality by allowing fans to create their own recipes and upload them.  It also includes a unique bookmarking function where fans can save recipes to a bookmarks folder.  The App is compatible with the iPad to allow for easy viewing of bookmarked recipes in the kitchen for budding Masterchefs!

With a firm focus on shareability of content and the clever use of open graph to allow friends of fans to see their activities, Channel 10 are paving the way for some fabulous future fan interactivity on social media.

Not content with being innovative on Facebook, Channel 10 has partnered with UK-based social media sharing platform Zeebox. You can read about it here. 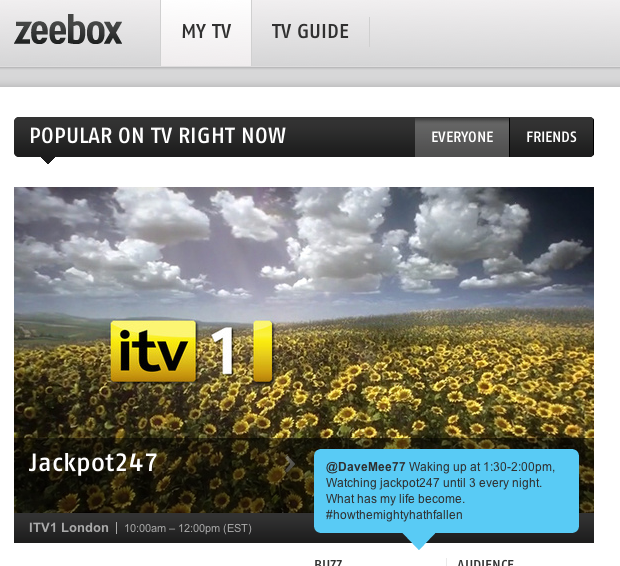 Channel 10 is set to give Channel 7's Fango a run for its money with Zeebox.

Set to launch in Australia later this year, Zeebox is a so-called “second screen” TV platform. Zeebox aims to make TV better by bringing the power of the web to every second of live TV – and making it a more immersive and social experience than ever before. Zeebox will go up against Fango in Australia, but with a twist. Zeebox can be used across all television networks, and not just restricted to one. Let's face it, we all change channels when viewing, so it makes sense for Ten to adopt a platform that gives viewers access to all channels, socially.

Did you know that according to Deloitte, 60 percent of us are multitasking in front of the television by using social media on mobile phones and iPads?  A change has arrived with the potential for viewers to interact with each other more than ever while watching, and (inevitably) for there to be more and more options to buy things that we see on screen.

Ten chief operating officer Jon Marquard said the launch of Zeebox in Australia was a key part of the network's digital media strategy, and that he hoped other networks would use Zeebox as well. “While we want everyone to watch Ten, we don't expect that viewers only ever watch Ten,” he said. “So we wanted an app that is agnostic over all channels and can have the ability for people to access a whole range of channels”.  Smart thinking, Mr Marquard.

I for one will be curious to see what Channel 10 comes up with next.  Something innovative, I am sure.

What about you?  Have you watched any of the sneak previews?  Are you a “social” TV Watcher?  What do you think of Zeebox? If you're wondering how to make a Slideshow on...

END_OF_DOCUMENT_TOKEN_TO_BE_REPLACED How to Find Video Content Ideas When You’re Stuck

END_OF_DOCUMENT_TOKEN_TO_BE_REPLACED

12 Marketing Videos for Your Business (that Viewers Love to Watch)